In case you didn’t hear already, it was MY BIRTHDAY this week! Not that I get at all excited… 😉

I’d decided on an afternoon tea party to celebrate, but what else. After hosting at home last year, this year a very lovely friend offered to hold it ar her house. She told me I was under no obligation to make anything but could if I so wanted. How well she knows me!

After being thrust into the spotlight after featuring on Season 3 of The Great British Bake Off, shown at the end of last year, I’d been wanting to make fondant fancies for a while, but, to be honest, wasn’t sure I was up to the challenge! Well, no time like the present, and they are so perfect for a tea party.

All roads seem to lead back to Mary Berry’s fondant fancy recipe, and I’m really not one to dispute. However a 4 egg cake seemed like rather a lot and a bit more than needed for an afternoon tea, when there are so many kinds of cake to be sampled. So – I scaled it down a little, and made a few adjustments at points I disagreed with – marzipan? No need! Buttercream? The butter/icing sugar ratio didn’t seem right!

Simply beat all the items into smooth mixture, and spoon into the tin. To make one large cake (and cut into squares afterwards), about a 10 – 15 cm square tin would be ideal, however I used a teeny little shortcut and checker-boarded my alphabet and number cake pan so that the cakes bake in their own tiny little squares. It took them around 15 minutes at 180 to cook like this. 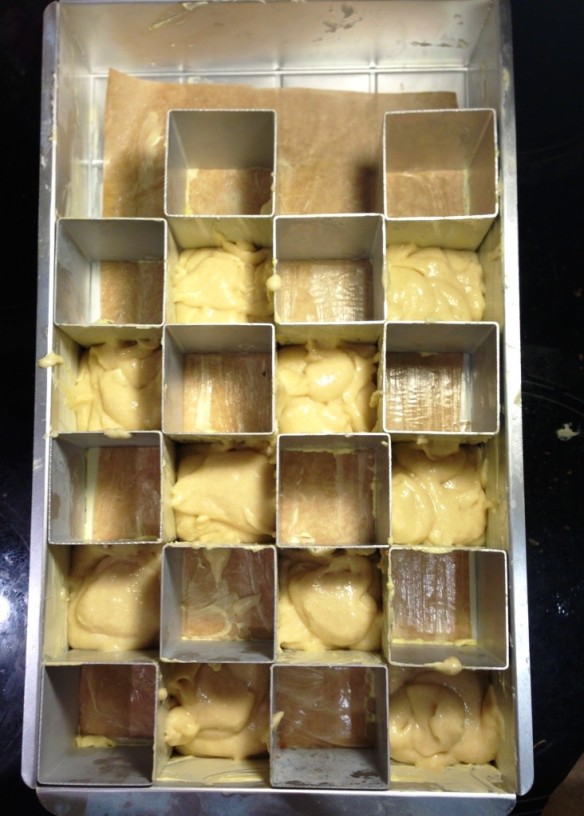 I paid for my shortcut ever so slightly when it came to taking them out after baking – 10 little squares all stuck on every side (despite some good tin greasing before they went in!) It took a good 5 minutes, and a very thin knife-like spatula,  to carefully prize all the little sponges away from the square blocks of the tin. 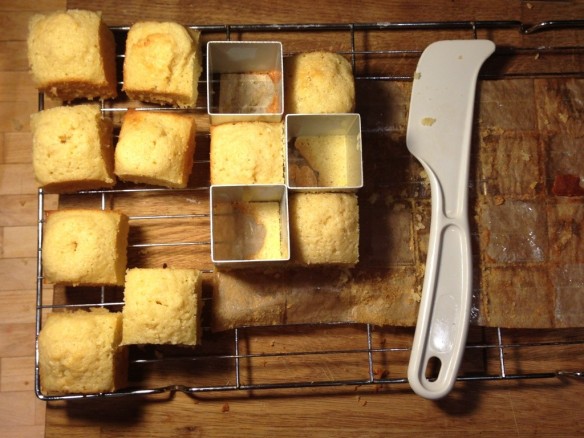 Once beaten together I set aside a small amount in a piping bag, putting in the fridge to firm up slightly. At this stage I chose to skip the marzipan and apricot jam Mary Berry’s recipe uses – sponge, buttercream and fondant seems a good enough combination as is!

With the remaining buttercream, I covered the 4 sides and top in a thin, smooth layer. Then, with the refrigerated icing, I piped small circular buttercream blobs onto the top of each cake. 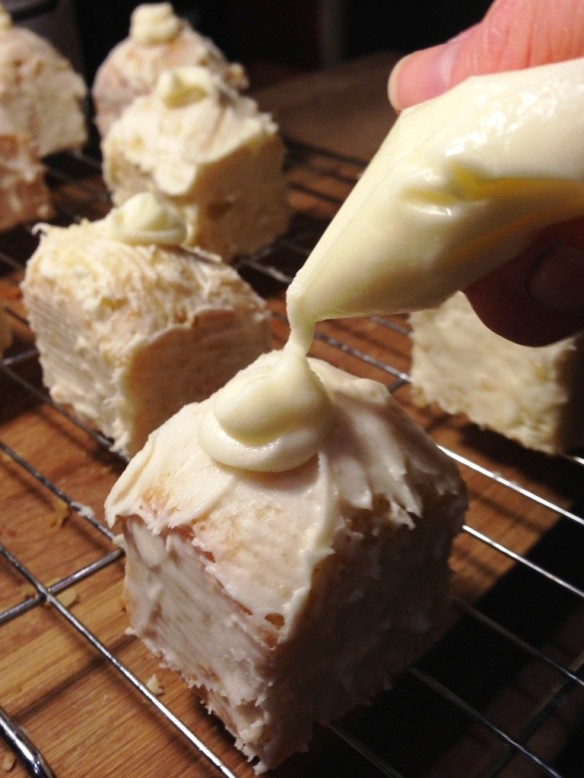 Whilst the cakes were setting in the fridge, I set to the fondant.

The fondant I used was already quite soft, and I broke it down into small chunks, placing into my stand mixer. Adding only a little water (30-50ml), I set the mixer off on a slow speed, and helped to break down the pieces by squashing with a spatula. More water can be added if needed!

Relatively quickly the fondant broke down into a paste, but I had to speed up the mixer and let it run for a good few minutes in order to get it completely smooth and free-flowing. It had an odd texture a little like melted marshmallows!

After seeing the disastrous attempts at dipping the cakes into the fondant on the GBBO, I decided this method resolutely was not for me. Instead, after colouring the fondant (split in half, pink and purple, my favourite colours) , I placed the cakes on a wire rack, on top of a baking tray covered with cling film, drizzling the fondant over them.

A little gentle coaxing with a teaspoon was all it took to ensure the sides of the cakes were all perfectly covered in fondant.

Placing the wire rack over a tray worked a treat – it caught all the drips and the clingfilm was easily taken off afterwards for a super-quick clear-up!

The final step – icing on the cake if you like! – thin lines of chocolate, drizzled across from a piping bag.

My only final dispute with Mary’s recipe is the timing. 30 – 60 minutes cooking, ok. 30 – 60 minutes preparation? I don’t think so! It took me at least a couple of hours to do everything from start to finish, including cooling times, edging in buttercream, and I only made half as many as the original recipe suggested! The other point not mentioned is drying time – I left the cakes in the pantry overnight and they were only just dry, the fondant does take a long time to set.

Next morning – using one of my great birthday presents, a light and photo studio, the cakes had their own photo shoot.

And they looked amazing! 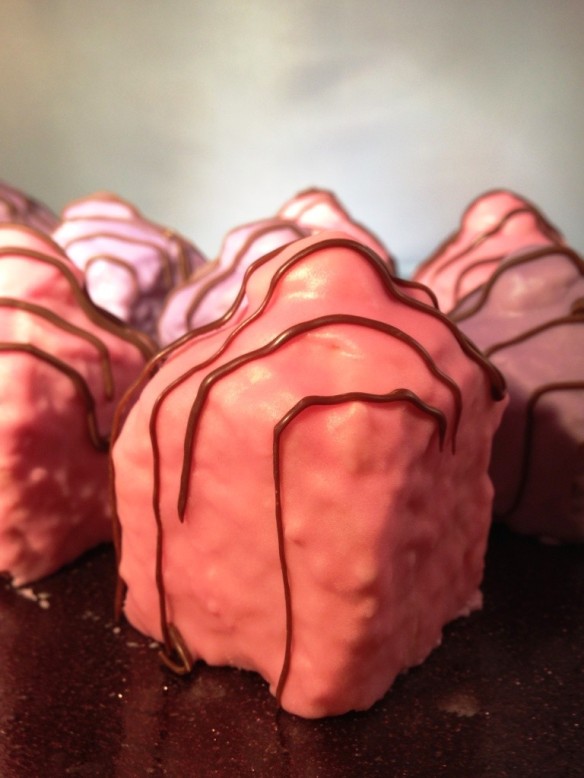 For a finishing touch, I placed the cakes in some complementing pink and purple cupcake wrappers, pinched at the edges to make a square shape to fit. And adorned with shoes and handbags – so very me, perfect for my birthday party!

And afternoon tea? Well, where do I start! The fancies were great little jewels atop the cake stands, but not forgetting fab finger sandwiches, crunchy chocolate fridge cake, mega mini meringues, and wonderful warm freshly-baked scones, all washed down with a glass of bubbles and plenty of tea 🙂 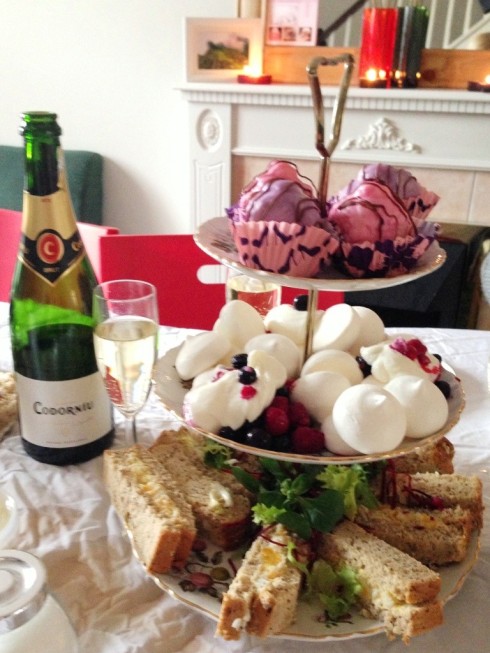 More cake you say? Look at my AMAZING birthday cake – a black forest gateau of a cake and sooo delicious – complete with name candle sparklers!

(Oh yes, we did set the fire alarms off…)

It was such a lovely afternoon – my tummy is still full of all the yummy, yummy cake. A great end to my birthday celebrations and thank you so much to my lovely friends that made it happen. Mwah! x