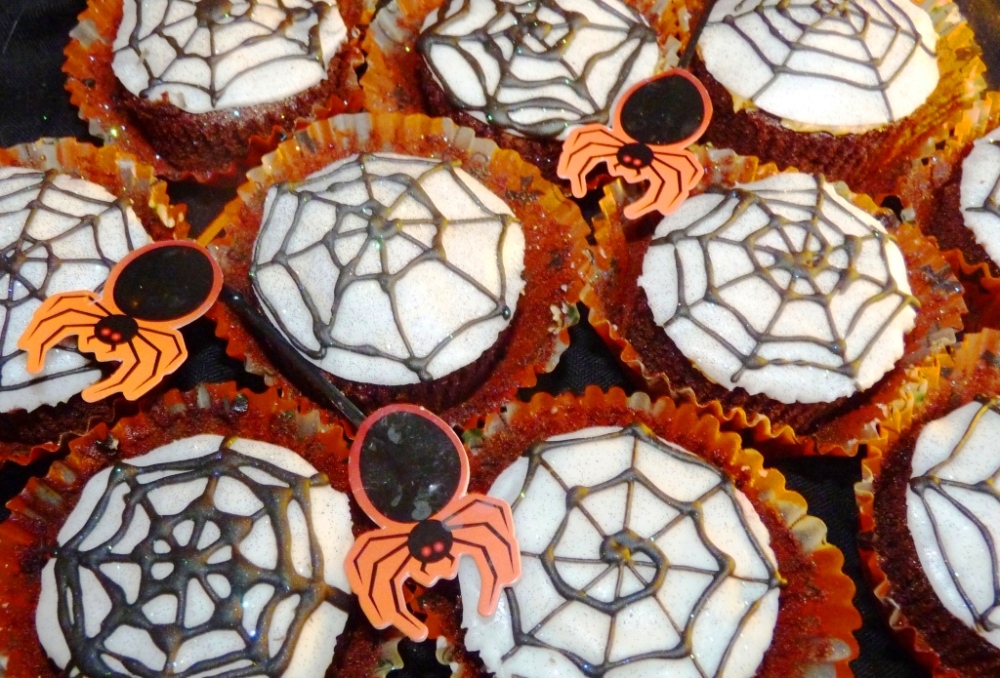 Another week, another cake club! This one was held by Cake Eaters Anonymous (you can also find them on facebook), which I am very proud to say started in Nottingham. There are now a few more clubs springing up around the country but this is surely the original and best 😉
The idea behind this cake club is slightly different to last weeks in that it is run in aid of charity. The charity itself varies from month to month, but all bakers pay about £3 per ticket, which gets them 3 (massively generous) pieces of cake, with the rest sold off, and other items raffled, all for the good cause.

The theme for this month was, of course, Halloween. A lot of bakers had similar ideas along the chocolate and orange lines, but it’s surely not possible to have too much of such a good thing!

I found these fantastic halloween cupcake cases in Wilkinsons that were so bang on trend I couldn’t possibly resist. 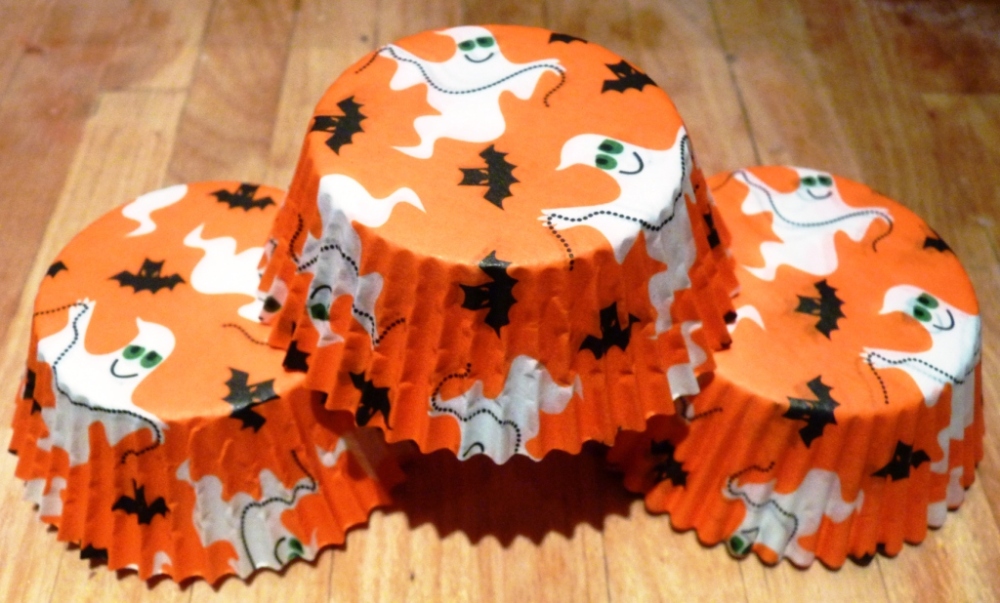 – cream together the butter and sugar until light and fluffy
– beat in the eggs one at a time with a little flour (to stop them curdling)
– sieve in the rest of the flour, cocoa, and baking powder, and fold in with a metal spoon
– spoon into the cupcake cases and bake at 180 for about 12 minutes, until firm but spongy to touch and/or a skewer inserted into the centre comes out clean and dry 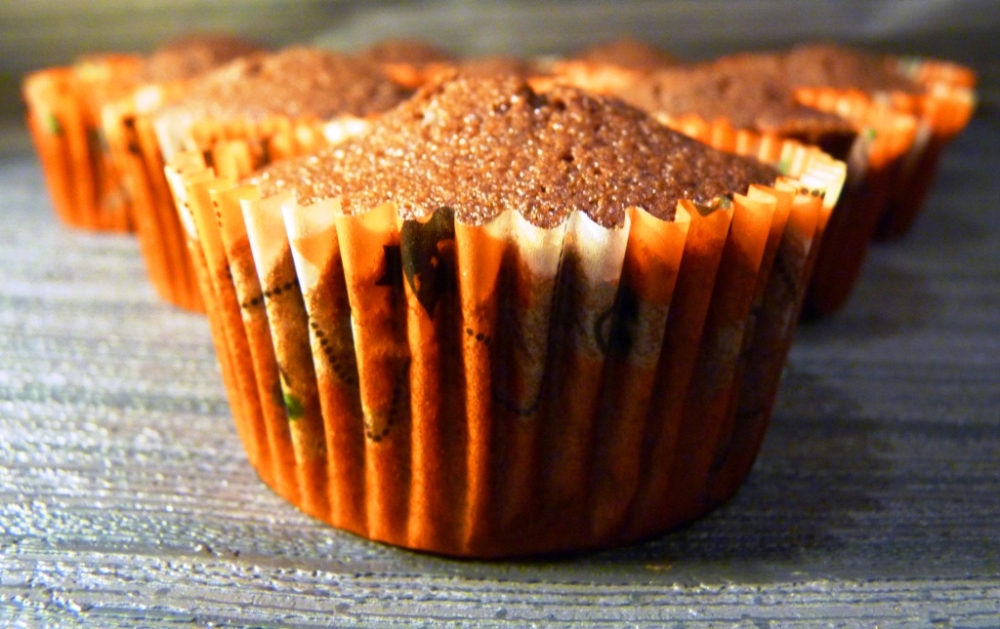 Whilst they were cooling I whipped up some orange buttercream. Orange in both colour and taste – when else can you get away with making near-luminous foods if not halloween!

– beat all the ingredients until you have a smooth, creamy icing 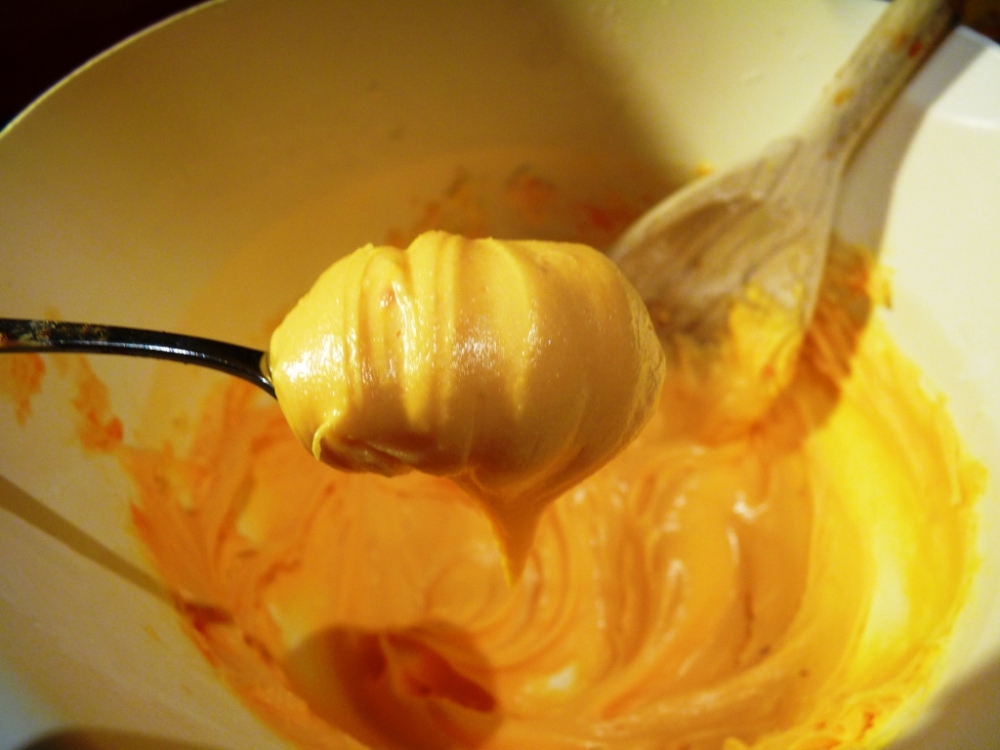 Once cool, I cored out the centre of the cupcakes with a sharp knife: 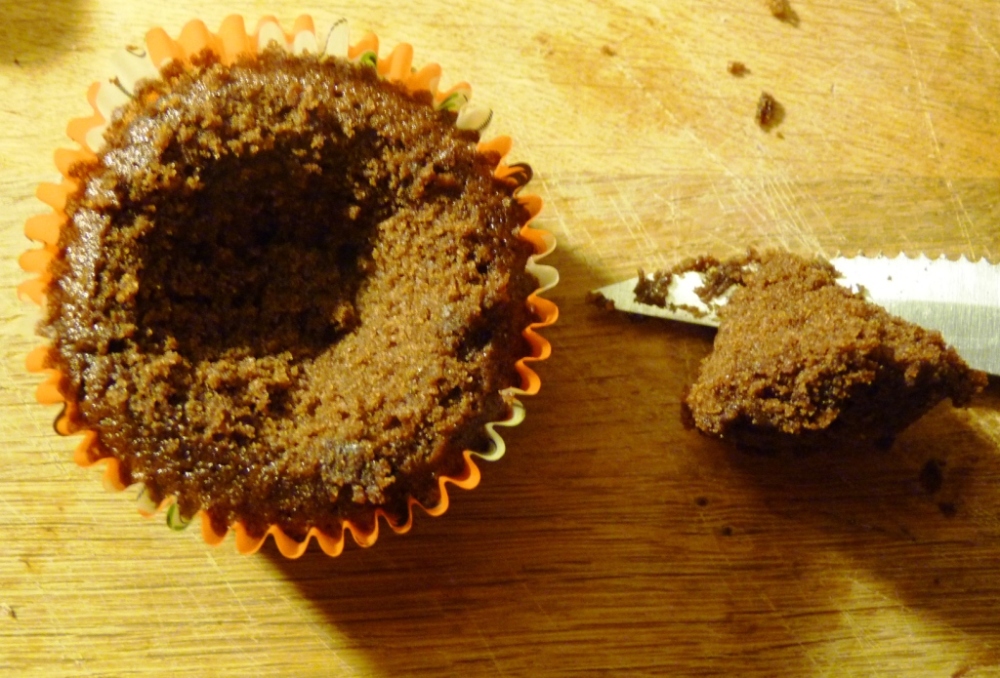 …spooned in a generous amount of the orange buttercream… 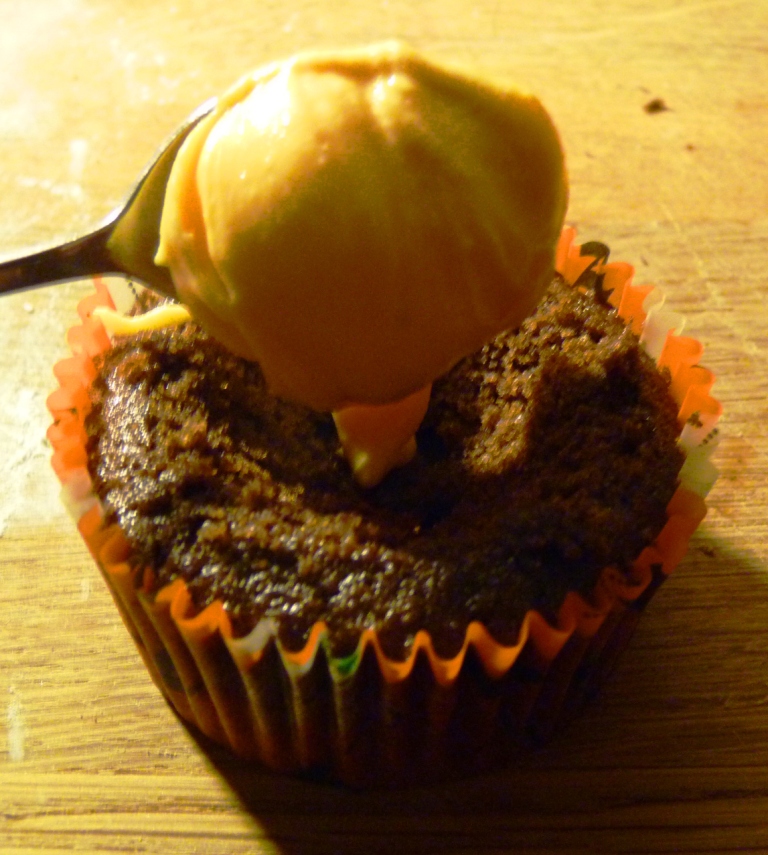 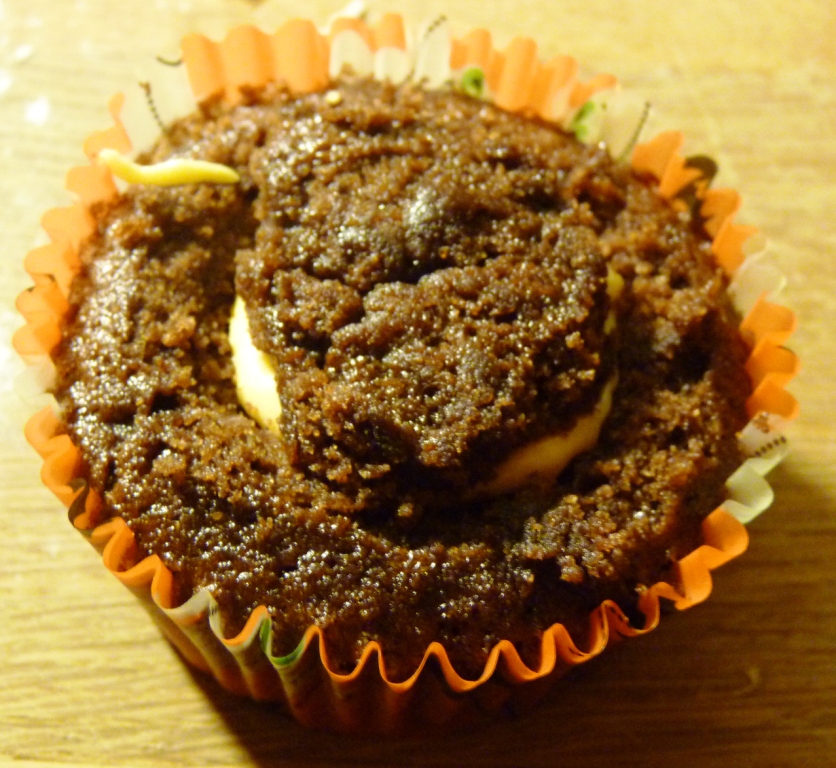 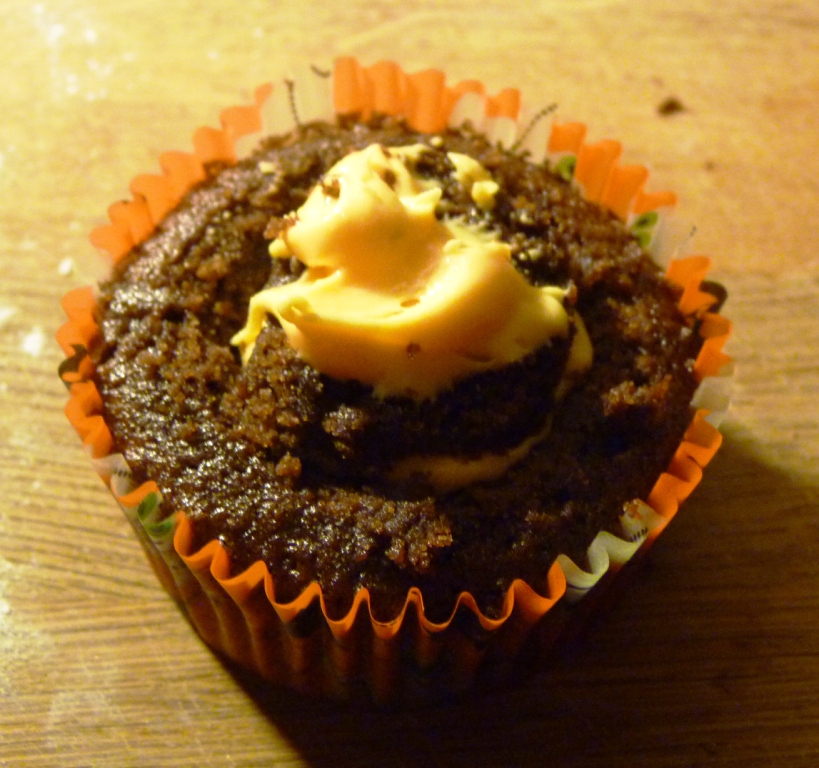 …cut circles out of fondant… 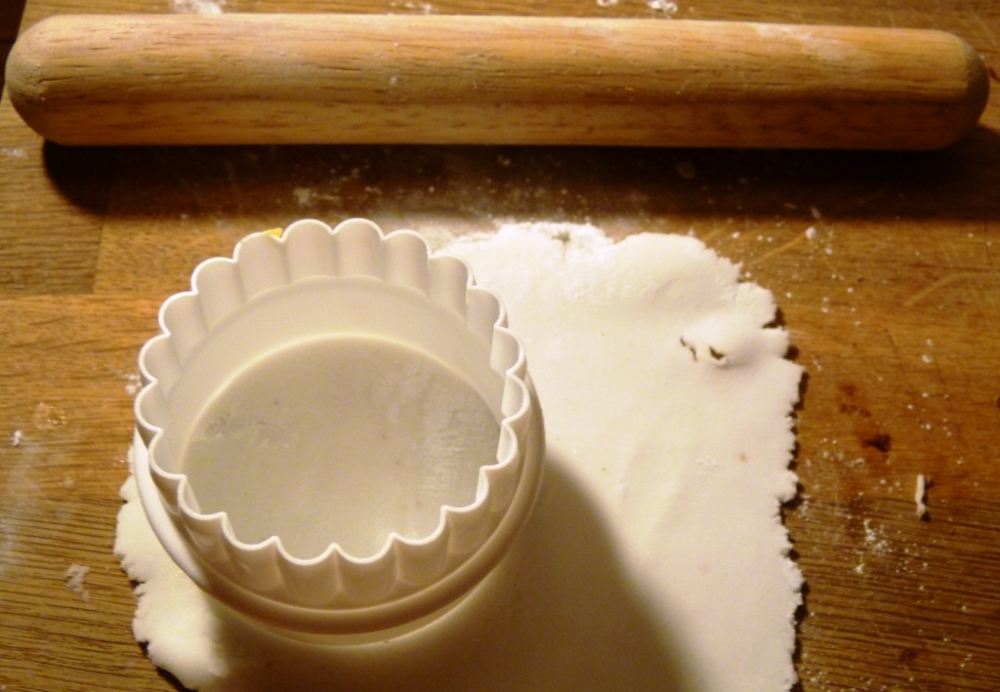 …and finally lay the fondant across the top of the cupcake, pressing lightly so the buttercream helps it stick. 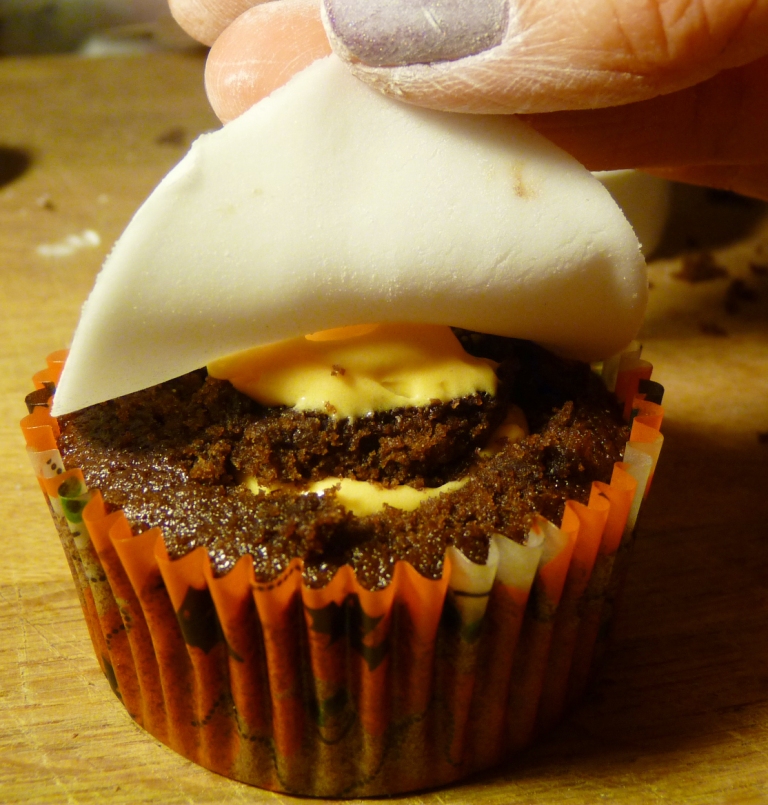 Onto the decoration – I mixed up some royal icing sugar, cocoa powder, and a few drops of black food colouring, to make a thick dark chocolate piping icing.

The cobwebs were incredibly easy to pipe – simply making a star out of 3 or 4 lines across the cake (intersecting in the centre), before slowly going round and making the webbing between each spoke. 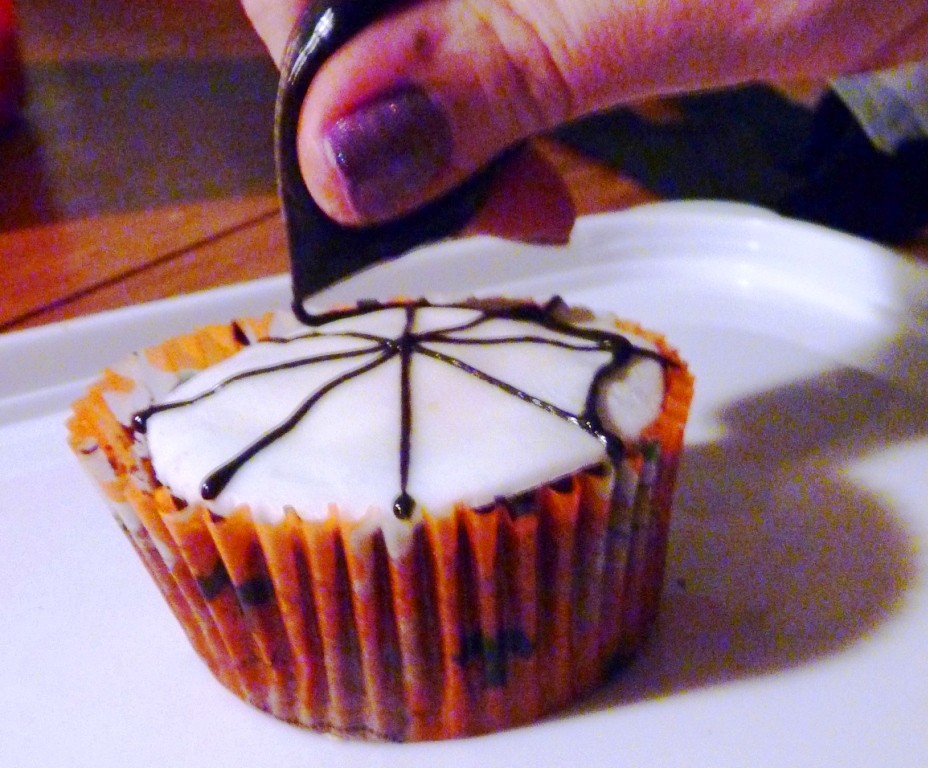 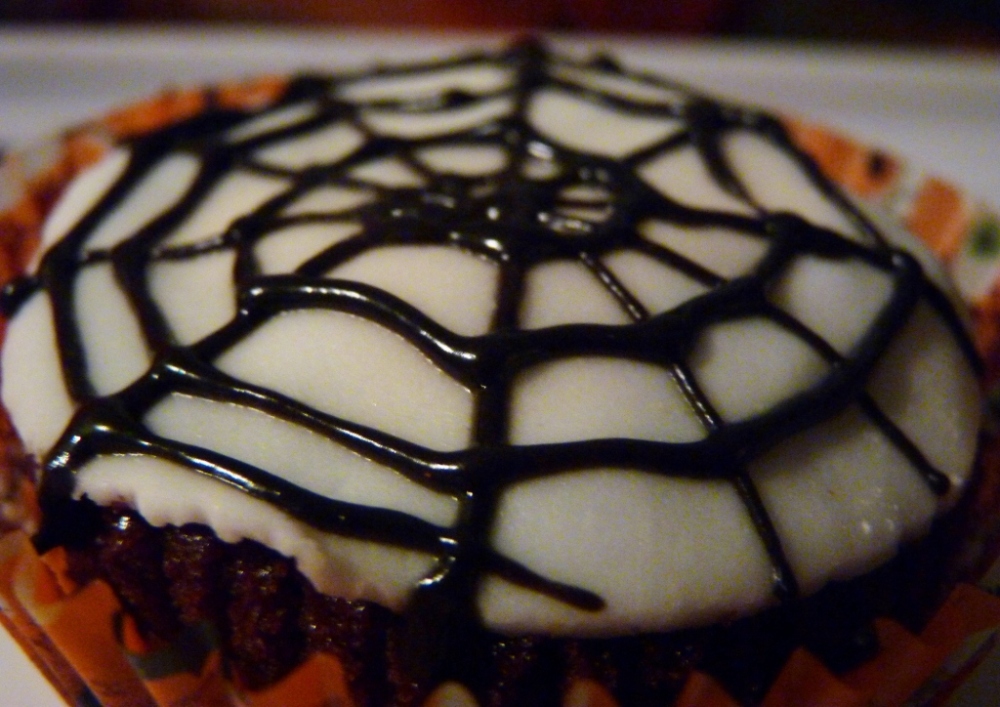 A pinch of edible glitter and a few spiders later… 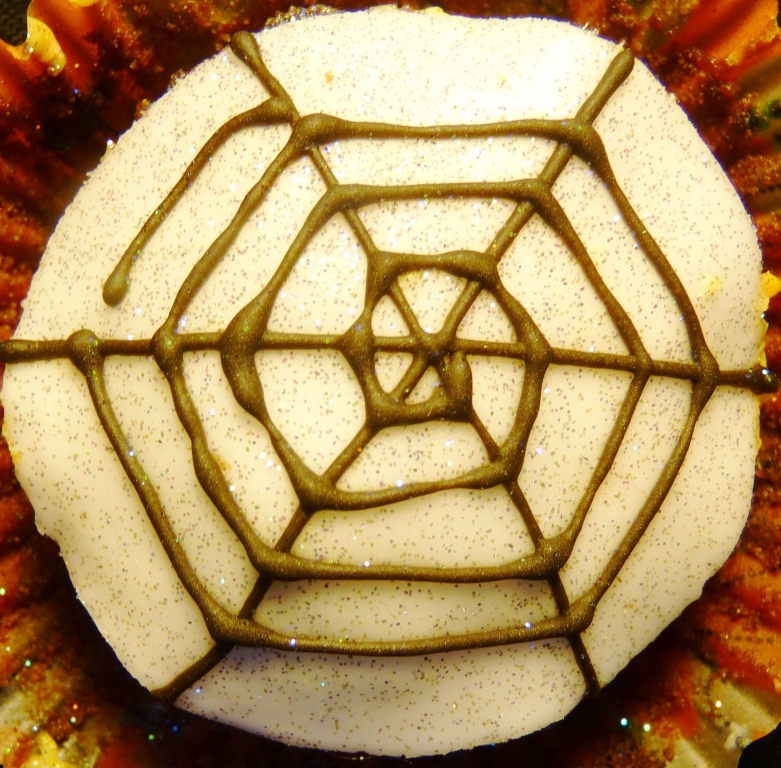 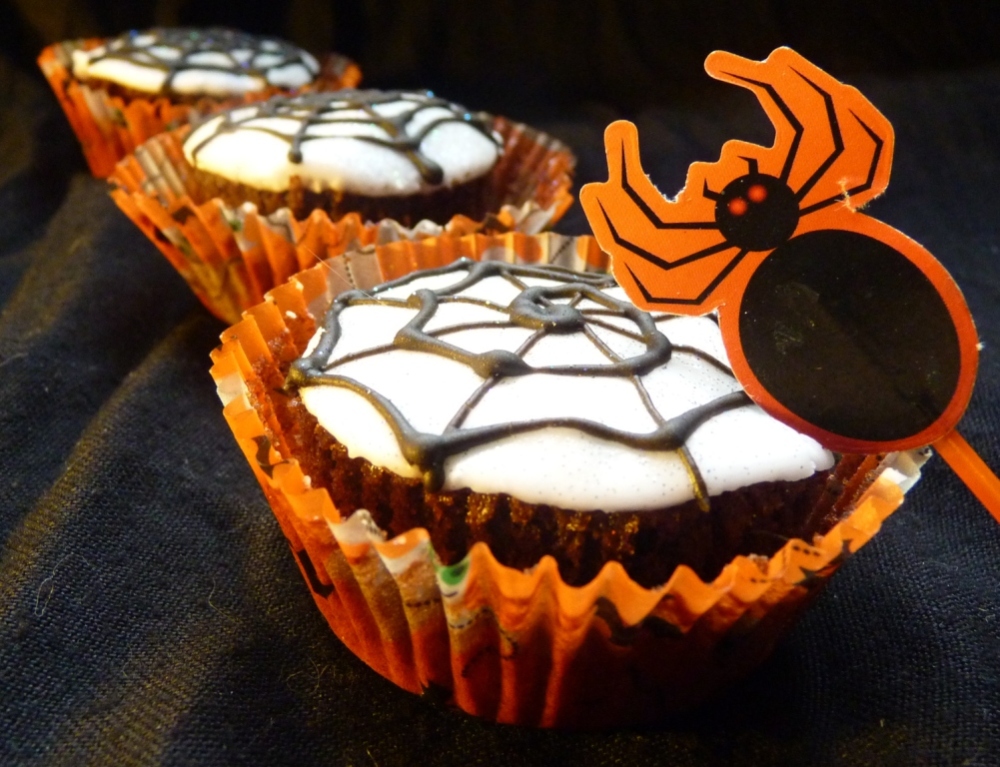 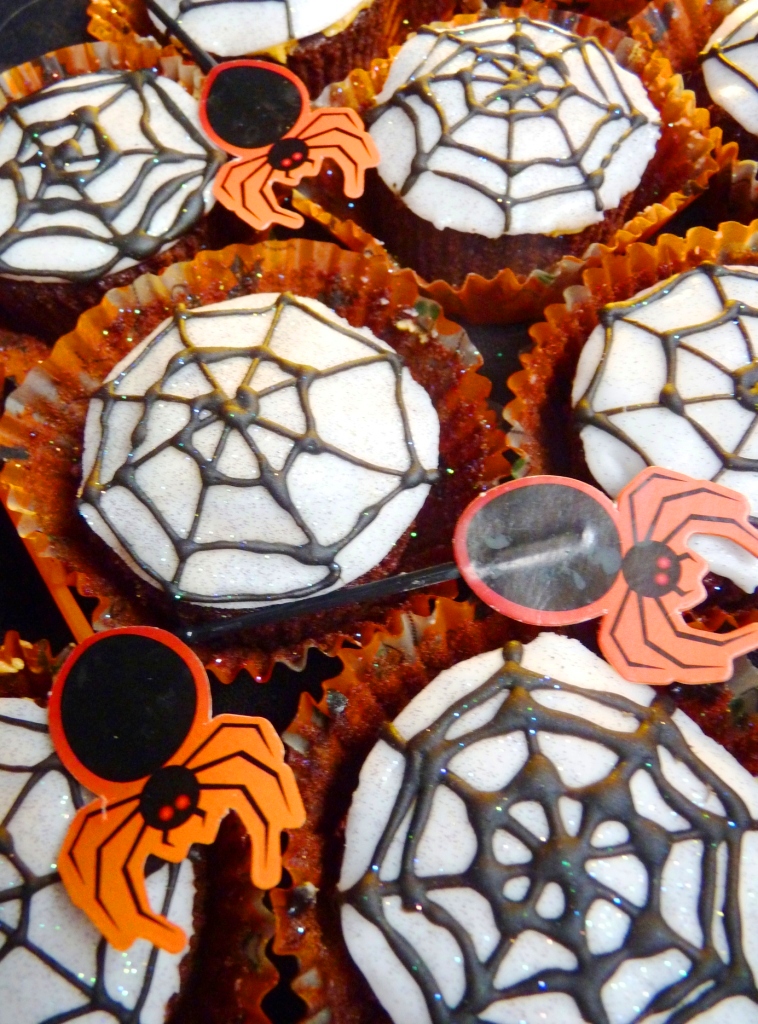 Inside the cakes were very generously filled, and the ultimate compliment came from Rob who said they tasted like Mr Kipling’s! The boy can definitely have more cake 🙂 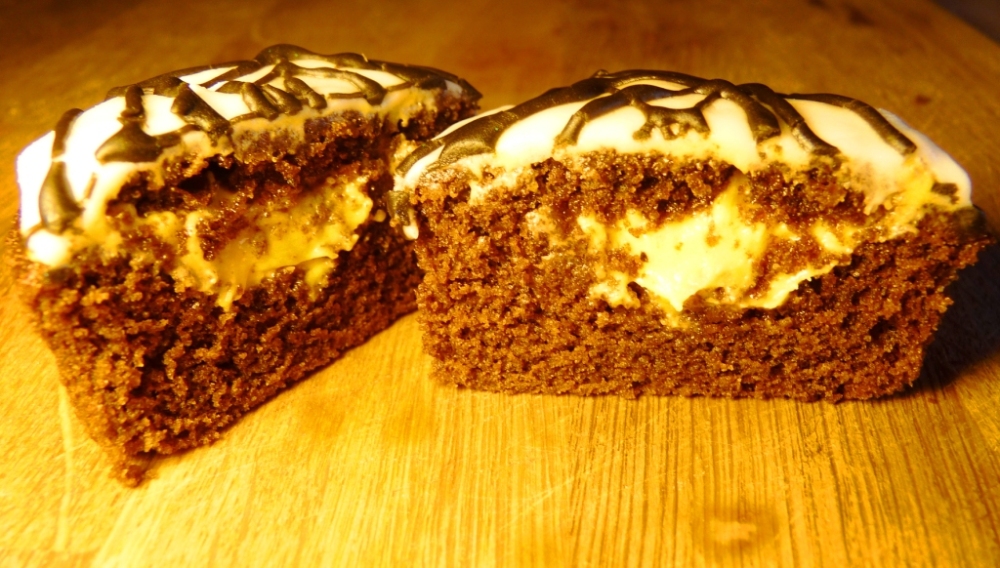 To take to the cake club I popped the cupcakes into some halloween cupcake wrappers. Not quite as intricate as the cupcake wrappers I reviewed a few months back, but these ones (along with the spiders) had come free with the halloween special of My Cake Decorating magazine – you can see the whole amazing stash of halloween goodies over on my twitter. 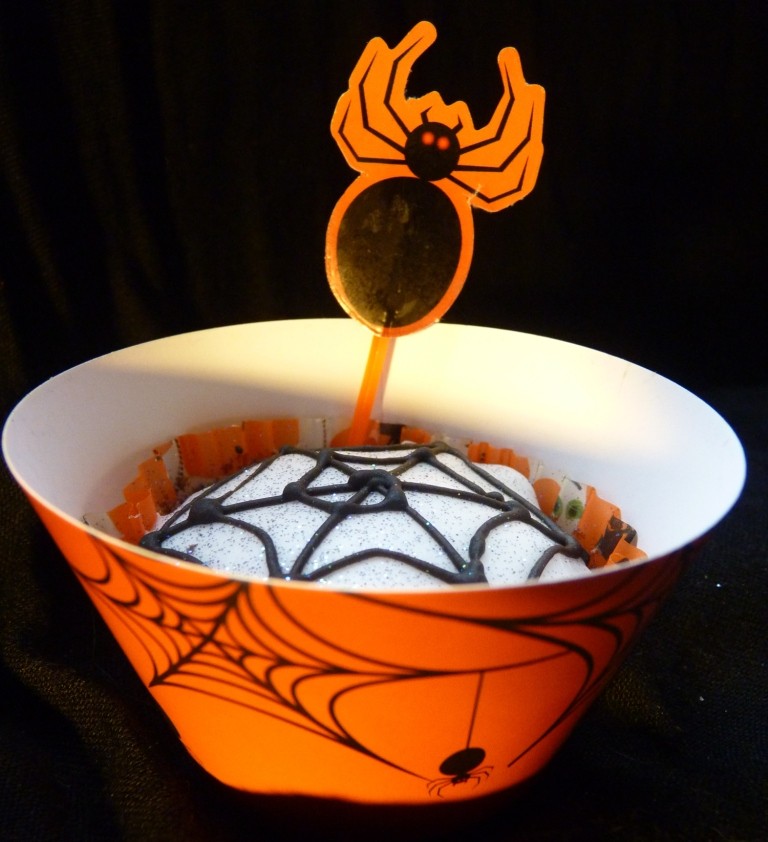 Finally it was time for cake club! The cupcakes looked fab on a stand (and surrounded by eyeballs): 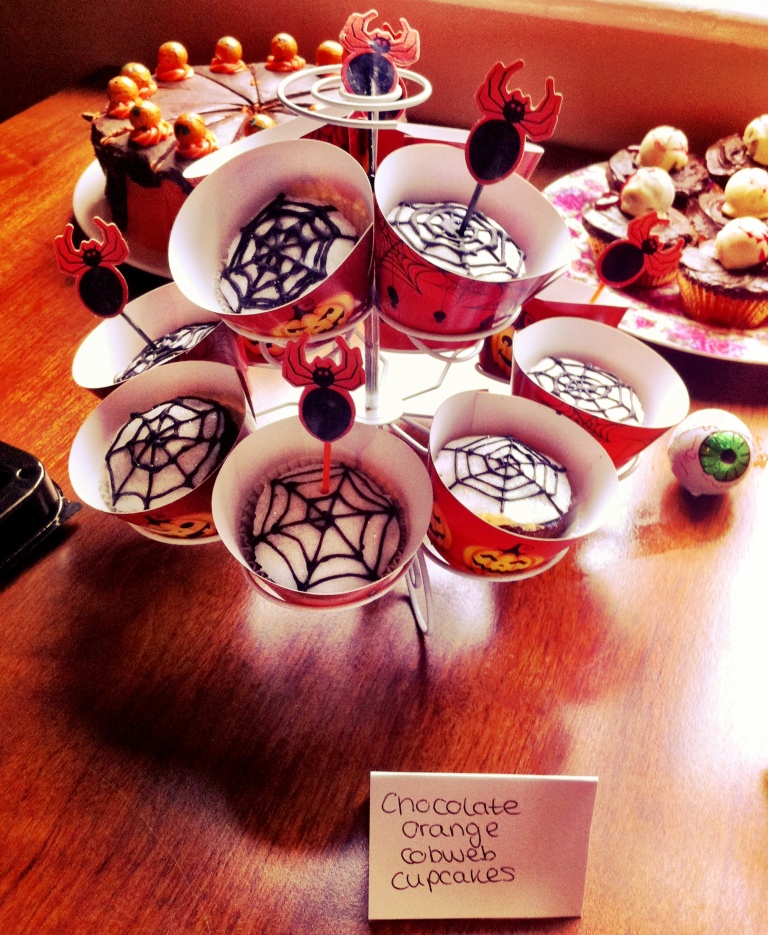 But not nearly as amazing as the great array of cake all put together! 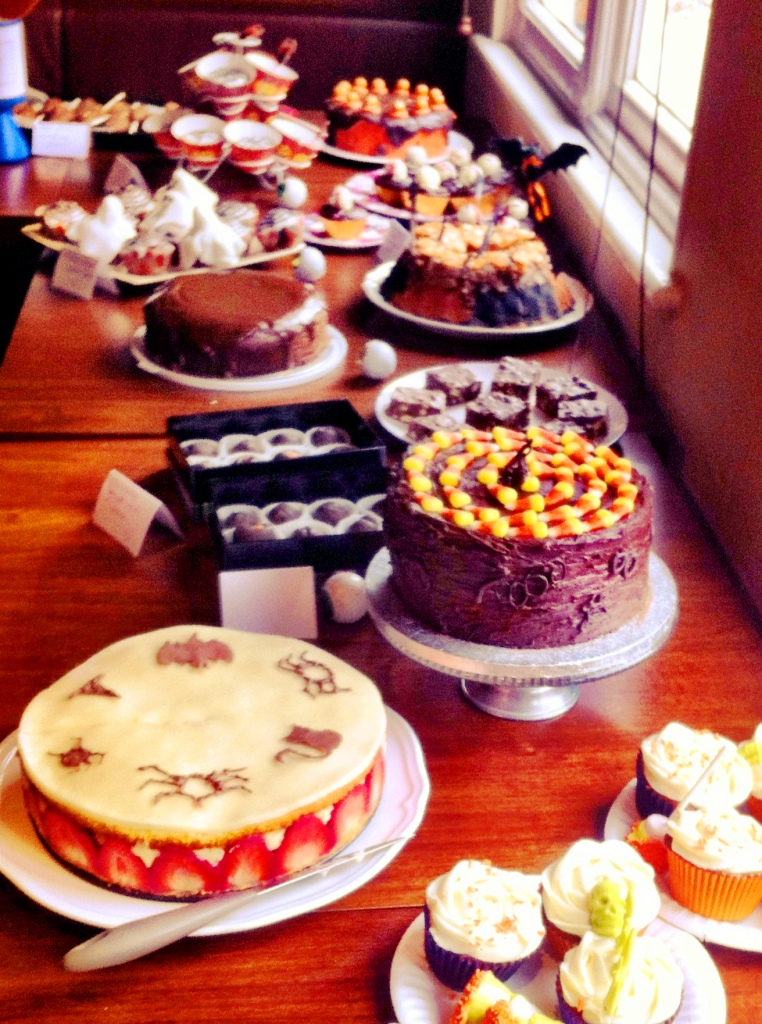 comfort food with health in mind